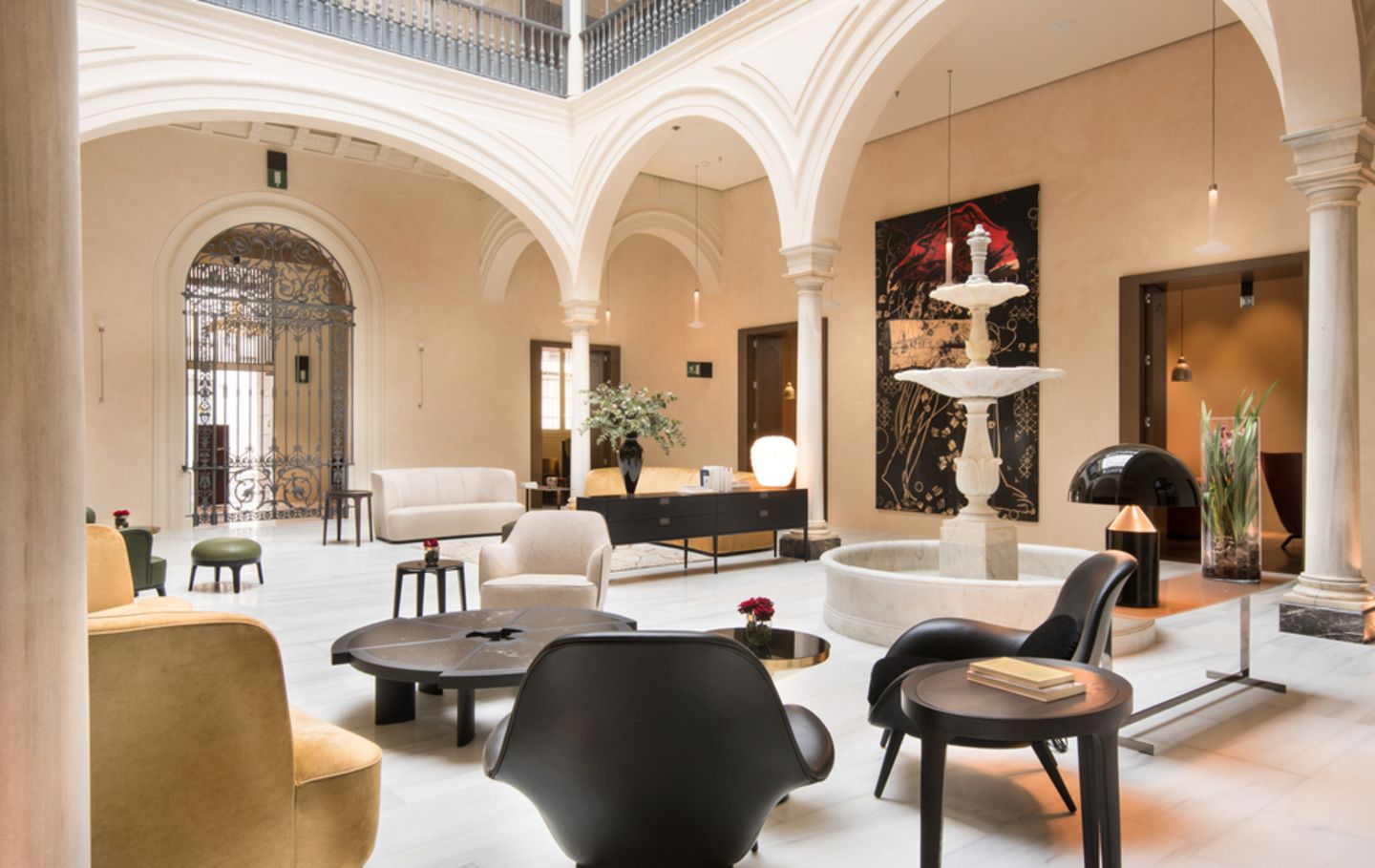 With the discovery of America (1492), the port of Seville becomes a strategic enclave for trade with the Indies. This represents an important economic development as well as a cultural and artistic transformation, known as the “Sevillian Golden Century”. Some of the most prosperous families, enriched by trade with the New World, commissioned the construction of beautiful manor houses in which they set their new residences (XV-XVI centuries). Currently there are about 25 palace-houses in Seville, some of which remain private residences.

Founded by the Pineda family in the 15th century and owned by the Duchy of Alba since the 17th century, the house occupies the space of the old monastery of “Santa María de las Dueñas”. In the 19th century, the Palace is converted into a neighbor's house. One of the dependencies is rented to the parents of the Spanish poet Antonio Machado (who was one of the 1898 Poetic Generation main exponents), who was born and spent his childhood here. Years later, the palace becomes a witness to the Dukes of Alba illustrious guests such as Jacqueline Kennedy, Grace Kelly or Rainier de Monaco. Its buildings and courtyards range different architectural styles and stands out for its historical value and its collection of paintings, tapestries, sculptures, photographs or furniture.

Built in the 15th century, it is owned by the Duchy of Medinaceli. Its history is as important as its heritage value. Courtyards, gardens, galleries, fountains, columns, plasterwork, tiles, pavilions, halls, furniture, together with a large collection of classic art and a series of bullfighting paintings by Goya, constitute the largest of all Sevillian palace-houses. Declared a Property of Cultural Interest and Spanish Historical Heritage, this house has been the scene of productions such as "Lawrence of Arabia" (1942).

Built in the 16th century, it passes through different owners until in 1901 it is acquired and restored by the Countess of Lebrija (illustrious lady and archeology lover). Considered “the best paved palace in Europe”, it stands out for its collection of Roman mosaics (especially those that cover the central patio floor), its arts collection, as well as a library with 4,000 volumes. This Renaissance palace is a Cultural Interest and Spanish Historical Heritage Property.

This Renaissance palatial residence was built in the 15th century by the Marquises of La Algaba, and it is one of the Sevillian civil Mudejar style best exponents. During its history, the building has different owners and it was intended for different uses (theater, neighbors' house and summer cinema), until it is acquired and rehabilitated by the Seville City Council, to house the Mudéjar Art Center of Sevilla.

Another of these Sevillian architectural treasures is the Casa Palacio Castelar, located in the historic center and in which the Mercer Hotel Sevilla is located. It is a bourgeois small palace dating from 1880, carefully restored by the Sevillian architects Cruz and Ortiz. The Mercer Hotel Sevilla preserves the original structure around the central courtyard or patio, the marble staircase or the high ceilings in the rooms situated in the "noble" floor of the old palace-house.