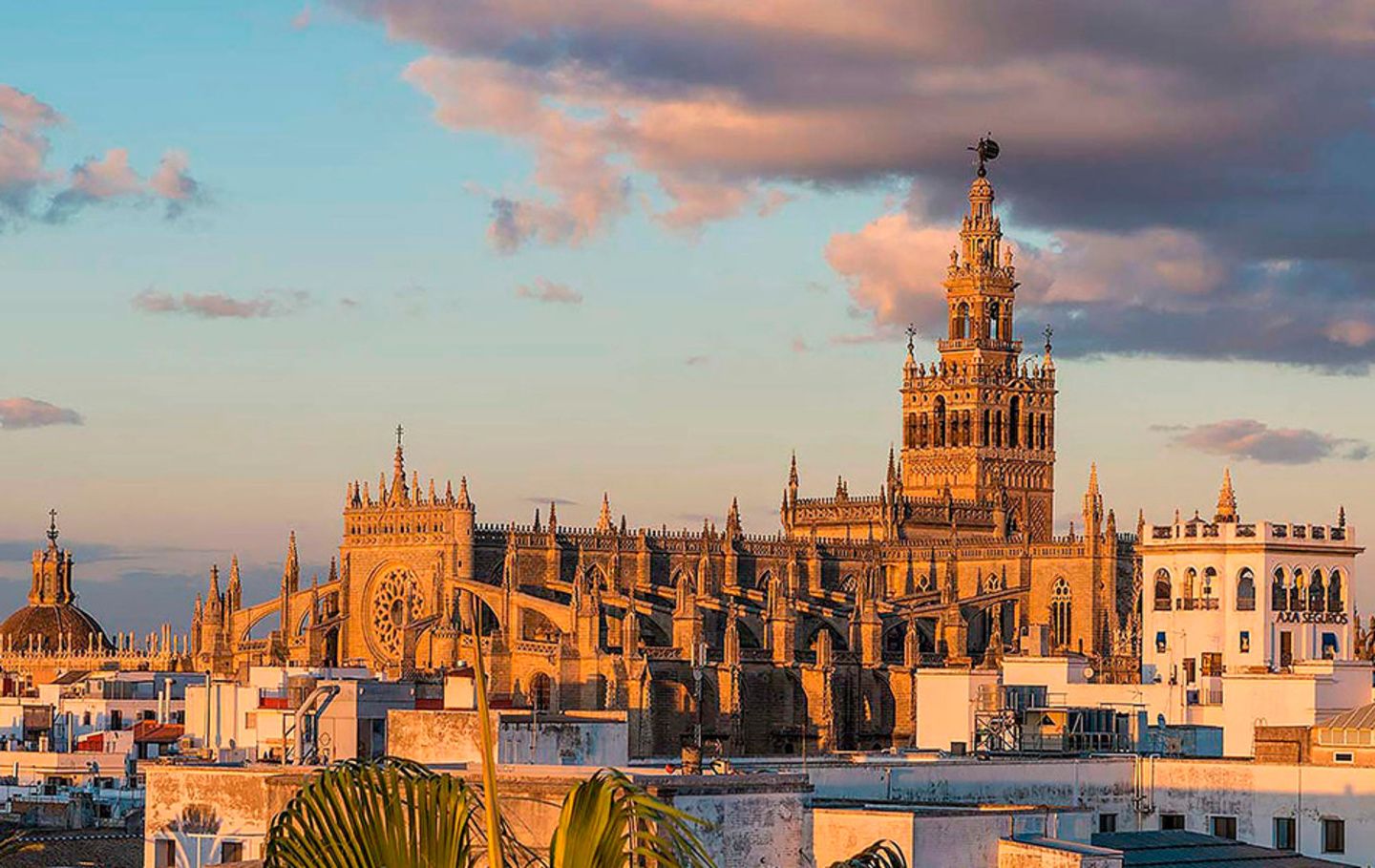 Giralda is without any doubt the main character of Seville’s historical center, an authentic visual show that hides remarkable history.

THE CATHEDRAL OF SEVILLE

Declared a World Heritage Site, the Cathedral of 'Santa María de la Sede' (known as Seville’s Cathedral) is the gothic temple with the largest surface in the world and symbol of the Andalusian capital. The Cathedral was built on the ancient largest Mosque (12th century,) of which the old minaret -current Giralda- and the Patio de los Naranjos (Orange Trees Courtyard) are preserved.

Symbols par excellence of Seville, the Cathedral and the Giralda are set in the heart of the city, just in front of the EME Catedral Hotel and just 500 meters away from the Mercer Sevilla.

The Giralda is the watchtower of the bell tower that ends the Cathedral of Seville. Its construction began in the 12th century inspired by the Koutoubia Mosque in Marrakech.

The lower two thirds of this tower belong to the minaret of the old Mosque of Seville, the upper third is a construction added in Christian times to house the bells (13th century). And on the summit, stands the “Giraldillo” (16th century).

Giralda’s name comes from the vane that crowns the tower popularly known as the Giraldillo ("that turns with the wind"). This sculpture called "Triumph of the Victorious Faith" (the victory of Christianity over the Muslim world) is made in bronze and weights more than a ton.

With its over 100 meters, the Giralda was for centuries the tallest tower in Spain and one of the highest in Europe. In addition, it became and still is a fingerprint in the configuration of the skyline in Seville, being its tallest building until the recent construction of the Pelli Tower. With a total of 24 bells, it is considered the Cathedral with the most bells in Spain.

For some years, a replica of the Giraldillo is located in the Prince Cathedral Gate, which allows visitors to admire all its details up close.

Witness to Seville’s, the Giralda represents the harmonious combination of the different architectural styles of the various civilizations that left their print on the building.

The Giralda is composed by two main parts: The first one of the tower is the Muslim one, when the Caliph Abu Yaqub Yusuf ordered the construction of the minaret of the Almohad mosque, in the 12th century. Later in the 16th century, the Christian part was added with the bell tower and the statue that symbolizes the faith, designed by the architect Hernán Ruiz. To these bodies are added the lilies (with a jug of bronze lilies in each of the four corners) and a last Renaissance segment.

INTERESTING FACTS ABOUT THE GIRALDA

The restoration work has allowed to reveal the original reddish color of the Giralda. In Murillo’s paintings, the Giralda was already shown in that color, which started to vanish due to the pass of time and several restorations made in the 18th and 19th centuries

Did you know that La Giralda has no stairs? That allowed the sultan to climb up on his horse while contemplating the views, 35 ramps were arranged.

One of the Giralda purpose throughout its history was as a lightning usage, that announced events or celebrations (as it’s done in modern skyscrapers!).

From the viewpoint, you can contemplate the whole city, and at the foot of the Giralda, the Patio de los Naranjos and the imposing Cathedral of Seville.