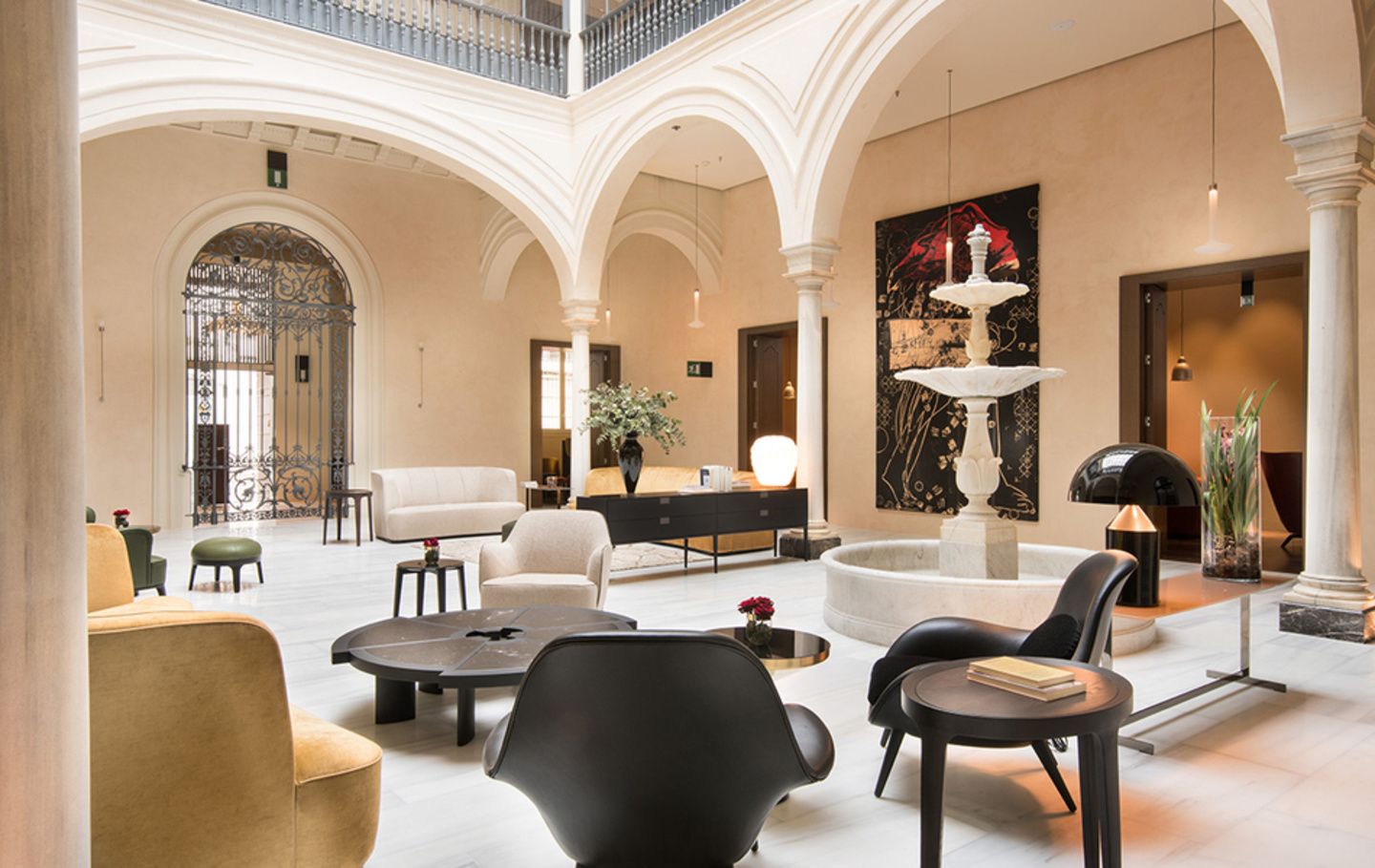 The Andalusian patio constitutes the common space by excellence within the popular architecture of Southern Spain. This architectural characteristic was consolidated by Romans, Arabs and Christians, over the centuries.

In the patricians or wealthy Roman families homes ('domus'), there used to be a pond for rainwater collection (the 'impluvium') located in the center of an opened courtyard (the 'atrium') where rooms ('cubiculas') were distributed. The Roman Hispania courtyards used to be in marble, surrounded by columns and decorated with small statues and greenery.

The Muslim patios model was developed in the Al-Andalus from the 10th century. It was originally from the Eastern Countries, where houses were traditionally decorated with plants, flowers, fountains, canals or wells, as a symbolic representation of the ‘Garden Paradise'.

Seville has monumental courtyards examples as the ‘Patio de los Naranjos’ (Orange Tree Courtyard) in the  Cathedral; or the historical and impressive patios at the ‘Real Alcázar’; or the ‘Palacio de Las Dueñas’ patio where the Spansih poet Antonio Machado played in his childhood...

LIFE IN THE PATIOS

The patio represented the heart of the house, in which the family social life was structured, with dances, songs, meals, parties and celebrations. The house was organized around this interior courtyard. Being an opened air space, the patio helped the conditioning of the house: during the day, light entered in the house interior areas, and at night, the fresh air circulated to the adjacent rooms. Some houses had different patios which were used for the private owners life, the family and the domestic service.

Besides the daily life around the courtyards, they were also used for folkloric celebrations or spring festivals, such as the ‘courtyards festival’ in Córdoba or the ‘Fiesta de las Cruces de Mayo’ (My Crosses Festival) in Seville.

There are many Sevillian patios styles. Beyond the classic Andalusian patio, there are modern concepts that are faithful to tradition. This is the case of the Mercer Sevilla courtyard.

The hotel is set in the old ‘Casa Palacio Castelar’, a 19th century small bourgeois palace renovated by the renowned Sevillian architects Cruz y Ortiz. It preserves original elements of the palace as the spectacular Andalusian central patio -the soul of the Mercer Sevilla- around which the 12 hotel rooms are located.

It’s an interior beautiful courtyard with marble floor and covered by a spectacular dome bathing the space with natural day light and harmony. Surrounding the patio, guests are astonished by the arches, the majestic marble staircase and high ceilings from the ancient palace noble floor.