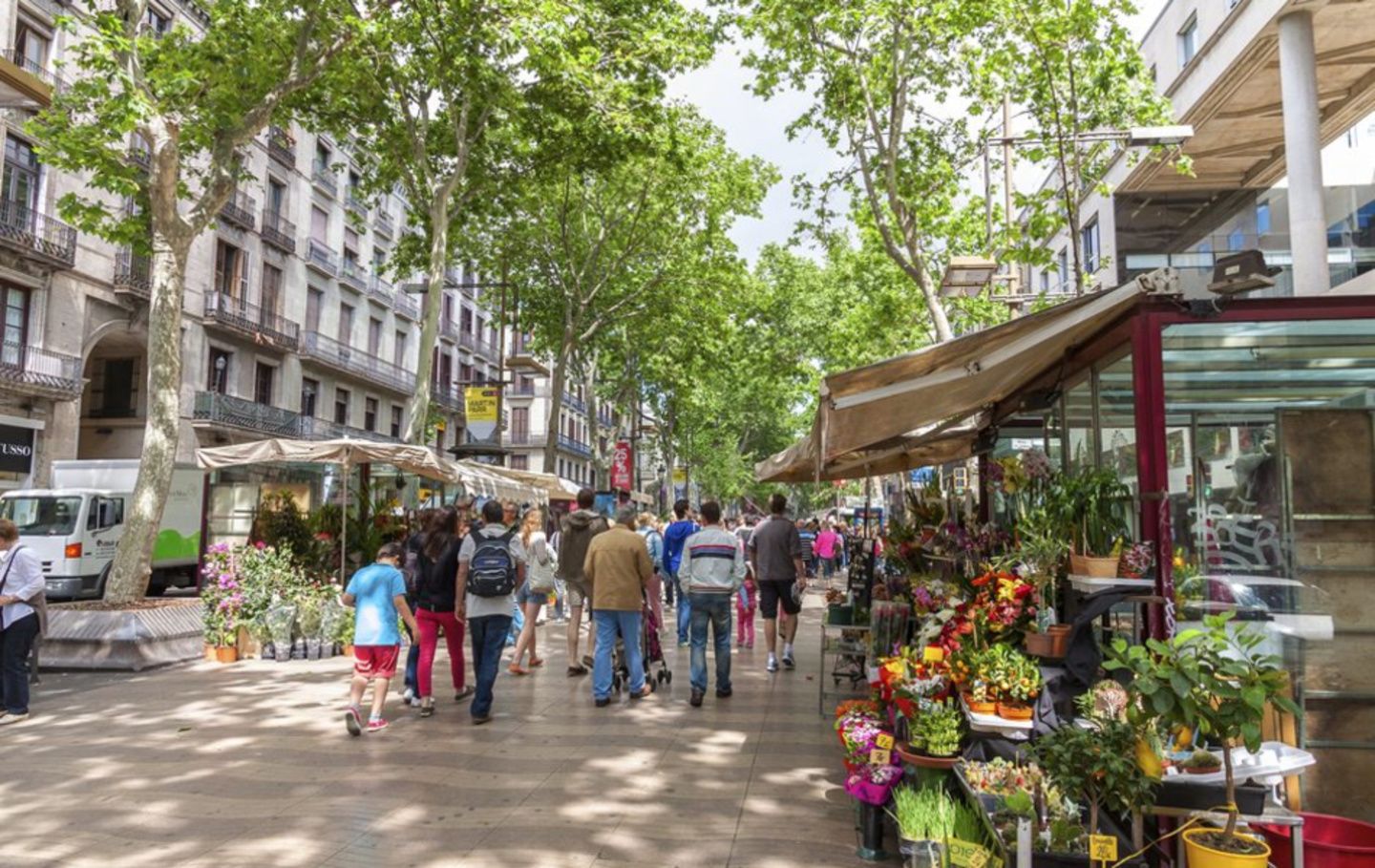 A walk through La Rambla

Located just 8 minutes walking from Mercer Barcelona, La Rambla runs 1.2km: A pleasant tour from Plaça Catalunya to the sea. More than 78 million people a year stroll along the most famous street in the city.

"The street where the four seasons of the year live together, the only street on earth that I wish it would never end". [Federico García Lorca, Spanish poet]

The demolition of Barcelona walls which surrounded the city began in the 18th century. La Rambla (which for centuries was just a torrent of water to supply the city) is urbanized and transformed into a promenade in which the Catalan bourgeoisie built up beautiful palaces as their main residences. The locals turn La Rambla into the new main city axis, in which one could rent a chair and contemplate the spectacle of life.

POINTS OF INTEREST: LA RAMBLA FROM NORTH TO SOUTH

'Canaletes' refers to the waterway which supplied water to the city (15th century). The current fountain was created for the occasion of the Universal Exhibition (1888). According to the legend, whoever drinks water from this fountain is destined to return to Barcelona. Another peculiarity is that F.C. Barcelona supporters celebrate Barça’s victories around this fountain.

This neoclassical style manor house was built in 1774 by the Marquis of Moja, where one of the entrance doors of medieval Barcelona used to be located. Declared Heritage of Cultural Interest, nowadays it’s the Catalan Heritage House.

A public fountain of drinking water to supply the city was placed in one of the access doors to the fortified city (the 'Porta Ferriça' or Iron Gate) and it became very popular among the neighbors. Today, both the fountain and the street keep the name of the old door that was decorated with iron bars (unit of measure of the time). Nowadays on the ceramic tiles of the current fountain scenes from the everyday life of that time can still be seen.

From the 13rd century, merchants installed their stands in this location of La Rambla (they did it outside the walls to skip the goods entry tax to the city). The market opens in the 19th century on the emplacement of an old convent ('Sant Josep' or Saint Joseph). Nowadays it’s the largest local market in Catalonia with more than 200 merchants and one of the most emblematic points of the city.

Inspired by the modernist style that was beginning to be fashionable at that time, the architect Josep Vilaseca refurbished this building and the Bruno Cuadros umbrella store located on the ground floor in 1883. Also known as 'Umbrellas house' it brings an oriental touch to the eclectic Ramblas.

Miró’s pavement was inaugurated in 1976 at 'La Boquería' Square on the Rambla. One of the main international abstract surrealism representatives, Joan Miró designed the mosaic as a greeting to travelers arriving by sea. The work has no protection and Rambla visitors walk daily on its pavement, expressly indicated by the artist.

The 'Liceu' is one of the most important opera houses in the world. Since 1847 it has been the stage of the most prestigious works. It has also been the meeting place of the Catalan upper class (in the lower floors of the theater), while the less opulent classes shared their opera passion on the upper floors. After its fire in 1994, it was rebuilt by incorporating notable technological improvements which made it one of the most modern theaters in the world.

A year after the beginning of the “Liceu” construction, the Royal Square urbanization starts where the old Capuchins Convent used to be located. Important families of the time chose this square as their new residence. Currently, it has a more bohemian and crowded atmosphere.

Eusebi Güell (an important industrialist, politician and patron from Barcelona) orders Antoni Gaudí the construction of his new family residence (1886). The result is a unique mansion adapted to the private and social needs of the Güell family. The modernist palace was declared a World Heritage Site by UNESCO.

Located at the confluence of La Rambla and the “Port Vell” (Old Harbor), Columbus Monument was built for the occasion of the Universal Exhibition (1888). It measures 57m high and an interior lift allows you to go to its viewpoint. Columbus's finger points out to the sea (initially it was said that it pointed out to America, which is located in the opposite direction).